The title of this blog is simply a warning not to even begin reading on an empty stomach.  After skimming through our photos to see if I could find anything of interest to write about, I found that, surprisingly (not really), an overwhelming majority of pictures focus on food.  Every time, and I mean every time, we sit down to a snack or meal or just a refreshing drink, Bill won’t let me touch anything until he has recorded it.  I have to admit that his snapshots have come in handy when we try to figure out where we were or what we were doing on a particular day – food documentation is key because our meals are almost always memorable, especially to Bill.  And, because so many of you have either asked about or drooled over previous food pics, I thought I may as well further indulge your visual senses with a photographic feast!  Cheers!

Let me start with the starters… I am so impressed with the freshness and quality of the salad fixin’s here.  My favorite, papaya salad or somtam, is very traditional, but every restaurant or street vendor has their own special way of making it.  The basic ingredients are slightly unripe green papaya, Thai chilies, roasted peanuts, dried shrimp, tomatoes, and a lime or two, all dressed with a mix of palm sugar and fish sauce.  It can then be garnished with long beans, cabbage, Thai basil, and carrots, or whatever else you might like to add (like shrimp).

And then there is a somtam that is prepared with corn and long beans…mighty tasty…and is topped with salted eggs, making it a perfect one-dish meal (not that we stop ordering at just one dish). Of course, the amount of spiciness is up to the diner. We usually say ‘phed mak,’ which means very spicy.  (It’s one of the first things I learned to say in Thai!).  I cannot get enough of the sweet and sour combination of this everyday salad.

There are other salad choices, however, that are delightful and delicious alternatives.  The pomelo salad is one of Bill’s go-to selections, with its nice balance of the acidic, sour grapefruity taste of the pomelo and the sweet fish sauce/palm sugar dressing, with a few peanuts and Thai chilies tossed in for fun.  Pomelo on its own works great for breakfast or even dessert with a sprinkling of a special ground up blend of salt, sugar, and…wait for it…Thai red chilies!  We are hoping to bring some of that back with us.

One last salad that deserves mentioning is the Laos larb, which has some of the same basic ingredients of sweet and sour dressing, lime, and chilies, but with a twist of additional minced meat (usually pork), shallots, scallions, and cilantro.  It’s one of those sides that you have to have a hankering for, as opposed to one that you order every day.  A waitress at one of our ‘regular’ restaurants pretty much puts an order in as soon as we walk in the door.  She recommended it one night, and because we really enjoyed it, she is happy to bring it to us all the time now!

Other veggies that I must rave about are the morning glory, Thai eggplant, sweet potato (especially the king-size fries), and any assorted vegetable platter.

Just the smell of curry makes my tastebuds tingle.  We have slurped down a variety of curries in the past two months.  From the kaffir lime-accented broth of massaman peanut curry to the spicy twang of green curry with a side of roti.  Not to mention some scrumptious yellow curries, including one with crab meat and another with pumpkin (a first for us).

And we love having a big bowl of crab claw soup served in a flaming pot!  Who doesn’t?

Steamed rice, fried rice, sticky rice; jasmine rice, black rice, riceberry rice; egg rice, crab rice, you-name-it rice!  It’s hard to pass a day without having some kind of rice, which is fine by me.  Even if we forget to order it, we will be asked what kind we want.  Sometimes it is served in a mound on a plate, minding its own business as a side dish, but other times it shows up in a woven basket or a banana leaf cone to emphasize the importance of this wonderful but simple staple.

I shouldn’t neglect the rice noodles as well, which are the main ingredient in pad thai, another traditional standby.  A friend took us to Thipsamai, the famous original pad thai restaurant, where patrons wait in a very long line for shrimp pad thai wrapped in egg.  The queue moves quickly right past the chefs who work fast and furious over extremely hot woks; flipping the transparent fried egg at just the right time, wrapping it around a bundle of noodles, and then sliding it onto plate after plate after plate.  A unique dining experience, for sure.

We also celebrated the Chinese New Year in Chinatown with a whole bunch of lucky longevity noodles, which shouldn’t be cut or chewed!  The longer the noodle, the longer you live.  I admit, though, I would have choked if I hadn’t chewed! 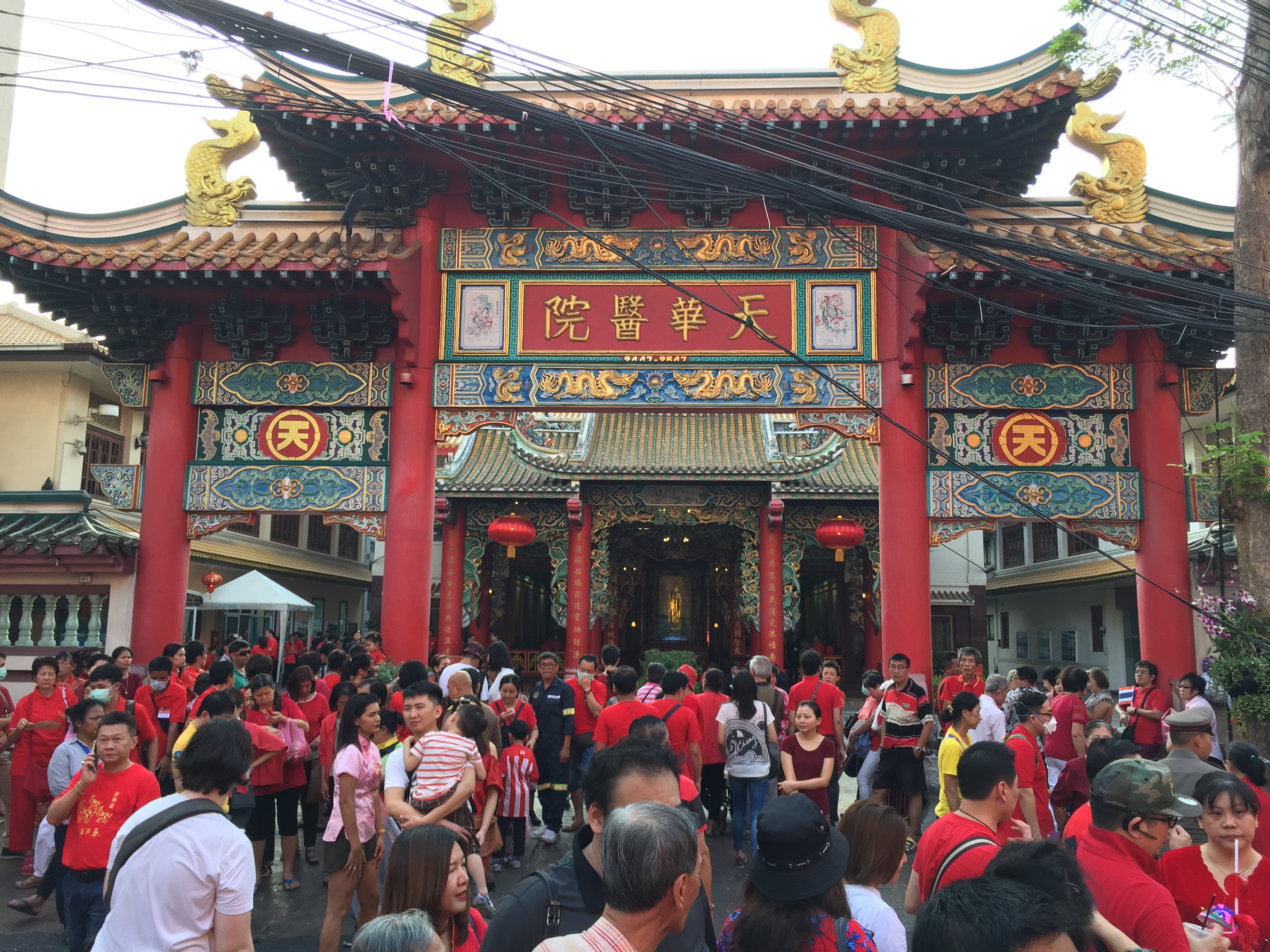 The Thais are just as creative as American chefs when it comes to preparing fish and seafood dishes.  I can honestly say we have eaten a boatload of fish!  Often it is deep fried and then smothered with chopped up red onions, peppers, ginger, garlic, and peanuts.  Again, how pretty is that?!

To change things up a bit, we ordered a grilled mackerel last week.  After unwrapping the foil, the heavily salted skin peeled right off to reveal a few stalks of lemongrass neatly embedded in the tender meat. 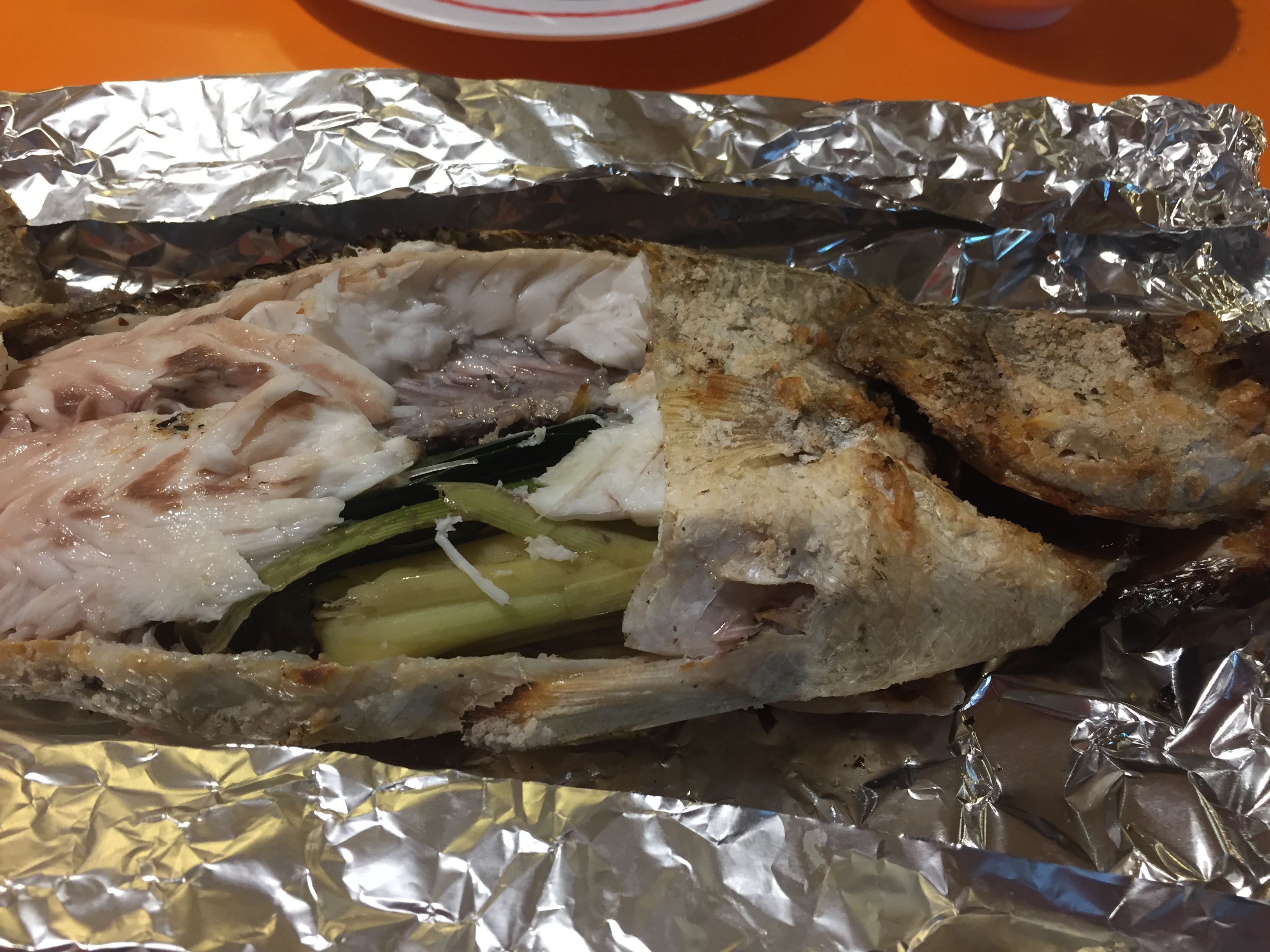 Another night we ordered Nile fish that pretty much scared us with its crazy thorn-like structures on its head and fierce little teeth in its gaping mouth.  That didn’t stop us from eating it though.

Although not nearly as scary looking as the aforementioned fish, I actually did stop eating the snails that Bill ordered. I’m not fond of rubbery meat that plays tug of war as I try to yank it out of the shell. I’m always happy to try things once, but in this case, once was enough.

On the other hand, I’m happy to peel the shells off of prawns, no matter how they are cooked at home or here in Bangkok.  A particular prawn plate that we are partial to is one in which the tasty critters are deep fried and then smothered in crispy garlic.  Once the prawns have been divvied up and devoured, Bill and I love to indulge ourselves with spoonfuls of the carmelized garlic remnants.  I keep telling Bill that his challenge upon returning to N.C. will be to experiment in the kitchen until he can reproduce this recipe.

One night, as a special treat, we were invited to an amazing fresh seafood restaurant.  Our host actually walked down an aisle, just like in a grocery store; picked out the live fish, shellfish, and other crustaceans, as well as fresh veggies and fruit; and put them in a grocery cart.  Then she told the waiter how she wanted everything cooked.  He, in turn, delivered the cart and the cooking directions outside to the chefs.  Shortly thereafter, the giant lazy Susan in the middle of our table was filled with seafood delicacies, from sushi and showy snowfish to grilled river prawns and flash-fried sweet clams (Bill’s personal favorite).  No wonder the restaurant’s motto is “If it swims, we have it!”

And finally, I need to cluck a bit about chicken.  In addition to various dishes with chicken as the main ingredient, we are consuming quite a few straight up fried chicken wings, believe it or not.  Bill rarely joins me in my quest for the perfect wings in North Carolina, but we are both pretty much addicted to them here.  I don’t know what makes them so special and easy to nibble away on, with or without the chili sauce that always accompanies them, but they definitely hit the spot.  On the few nights that we can’t decide what to eat, we’ll head to Shambala’s for chicken wings and somtam – a no-frill, good-deal, yummy meal.

What? No mention of desserts?  Well, to be honest, other than a scoop of ice cream from Floaters or a plate of fresh fruit, we really haven’t tried too many.  The Thais like their different flavored jellies to round out a meal; I am not a fan of the gummy texture.  I do have my eye on a little crepe shop down the street.  I’ll let you know if I take the plunge!

As you can see, we are dining daily on delicious delicacies.  Which reminds me, what will we feast on tonight??!!  Gotta go!

View all posts by perry suk